I started running back in 2007 after I finally recovered from bunion surgery. I vowed never to take my feet for granted again after being on crutches for 6+ weeks. I took a local Learn to Run program and loved it and wasn’t too bad at it either. Since my first official race – I was the last minute runner for a triathlon team – I was hooked.  I then  did a few relay races, a few half marathons and then a few marathons.  I even managed to qualify for Boston when I ran my first marathon.  That was an amazing experience.  I’m on a temporary leave from marathons right now and have just focussed on half marathons – I love that distance.

I run outdoors, preferably on trails, with my hyper mixed breed dog Kobi. We always seem to have some form of adventure together. Usually because she doesn’t listen very well and is way more fit than I am. And if you’re familiar with northern British Columbia, you know about the wildlife. There is a lot of wildlife – from bears to marmots – which adds an interesting element to any run.  I also like to eat, which is why I have to run and it’s often the thought of what I’m going to eat after my run that motivates me.  I also need to run to keep Kobi happy.

4 thoughts on “About Me” 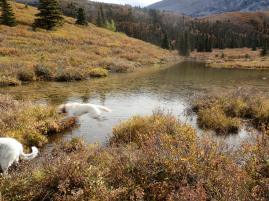