Have to have a Kobi photo

I had to take a quick trip south earlier this week, only about 1000 miles south, but everything is that far away from here.

Of course I had to squeeze some running in as I was in a pretty cool rural area and it was only a balmy -5C.  I headed down the road and after a few minutes spotted a snowmobile trail heading into the woods. When it comes to me and trails, it’s kind of like flies on poop, I just gotta check it out. 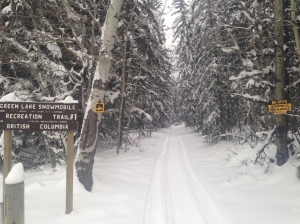 The trail I found

First I stopped to take a photo of the signs at the trail and noticed I was standing on a cattle guard (aka cattle stop, cattle grid, Texas gate, livestock guard). I was totally distracted taking photos and walked backwards over the cattle guard not really paying attention.

I quickly learned that caution should be applied when walking backwards over cattle guards in the snow. It appeared that the snow was packed to the top of the guard, thanks to the snowmobile tracks, but it wasn’t, it was actually hollow underneath. As a result of this illusion, I stepped between the parallel bars of very hard steel and proceed to fall through.

You know that moment when you suddenly realize you aren’t on a solid surface anymore and you’re falling, I had that moment. Then of course the first thought through my head (the one that always presents itself when free-falling) was, “this is going to hurt”.

See how it looks like the snow goes to the top, but really doesn’t.

I fell between the steel bars and landed smack on my butt. It didn’t hurt!  I then did what I always do after a fall, a quick scan to see who saw. No one fortunately.

I did smack my shin pretty good trying to get my leg out from between the steel bars.  I shook it off and assessed the damage, nothing was broken so I proceeded to start trotting along the trail happier than a fly on poop again.

Then that little smarty-pants voice in my head spoke up and reminded me I was in the thick of mountain lion country and it’s winter when mountain lions are the hungriest. Nothing scares me more than mountain lions, well maybe velociraptors, but thankfully those are extinct (although they still scare me). 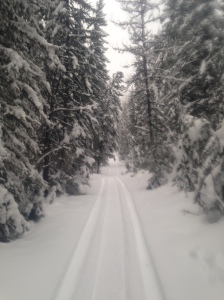 About when I started thinking about mountain lions

I had no safety gear with me, no Kobi my fearless protector, and my cell phone was now dead thanks to my cold weather photography obsession with a battery that only had 20% left on it when I left the warm house.

Long story short, I got a little turned around, ended up doubling back and eventually made it back to the cattle guard and the road without getting mauled by a mountain lion or breaking a leg. Phew.

I stuck to the road after that and had an uneventful but enjoyable run. Lessons learned, don’t step between the metal bars of cattle guards in the snow and don’t run in mountain lion country without at least a cell phone that works.

Ever had a run-in with a cattle guard or are you smarter than that?

It’s been almost a week into 2015 and life in the north has not disappointed.  Here are some exciting highlights…

We had a Chinook on New Year’s day, evening actually.  There was a really warm wind and within a few hours it went from -15C to +7C .  The drastic temperature increase resulted in a drastic snow melt and then 10 hours later it dropped back down to -15C and turned everything to ice.  Have no fear because then it started to snow, a lot, just so all the treacherous ice was well hidden.

New Year’s day run, Kobi is behind the bigger dog. The Chinook happened after this.

After the impressive snowfall, I had to go for a snowshoe with my wing-girl Kobi.  We took off on the trails behind our place (middle of nowhere) which are all uphill for what seems like forever.  Not 10 minutes in I noticed Kobi lock onto something with her doggy radar.  It was a small herd of elk.  They ran into the woods once they heard me getting Kobi back under control (i.e. yelling at her).  Fortunately I had her under control before she could be a real terror.  That was exciting.

We carried on and then Kobi locked onto 2 grouse.  She loves grouse.  What dog wouldn’t love giant chickens that fly and travel in large flocks?  When one flies away there are more to choose from.  Don’t worry, no grouse were harmed, much to Kobi’s disappointment.

Eventually we arrived at the home stretch which is all downhill.  Nothing feels as good as running downhill after walk-jogging for 2km uphill in fresh snow with snowshoes strapped to your feet.  I have never felt so fast in my life.  I’m sure I wasn’t fast, but I felt like Meb.

Me running like Meb, notice Kobi is standing still waiting for me

Then there was the full moon on the weekend which was amazing, but then it got really cold.  Like -27C (-17F) not counting the windchill as who counts the windchill (probably smart people). 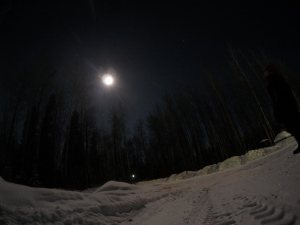 I had to go cross-country skiing the next day because it was just so bright and shiny out.  If it was -30C or colder I may have reconsidered, but heck, it was only -27C (-32C with the windchill, but I’m not a smart person).

A word of caution here, do consider the windchill and don’t try to take too many photos documenting your adventures when it’s -27C out.  It’s hard on fingers and gadget batteries.  Although, recall I have prototyped a pretty awesome smart phone warmer (read here).  I also keep the hand-warmer business in business as my hands are chronically cold from October to May. 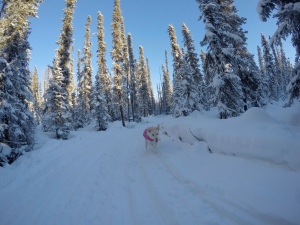 This was the -27C ski day. Kobi is sporting her new pink jacket.

The icing on the cake was the northern lights on Sunday night (and prior to 11PM).  However, by the time I got all my cold weather gear on (snowsuit, toque, headlight, gloves, mittens and neck warmer) and camera tripod ready to go, they had settled down so no spectacular photos.  Maybe next time.

How about you, do you consider windchill before venturing outside?  Ever feel Meb fast?  Does your dog like chasing things they’re not supposed to like large ungulates and flying chickens?

It was nice to see the lake without ice. #kobisaysyoucantseealltheducks #runningwithdogs #raddog #outerpeace #waterdog
I think Kobi is going to sue me for cruelty and humiliation. I let her run for about 4km and then pushed her for another 4km. She was unimpressed as you can see. It’s a roomy ride, if she’d lie down. #shemightloveiteventually #kobisaysiamsoembarrassed #runningwithdogs #dogarthritis
Despite this snowman’s prey avoidance strategy of getting high and not moving, the fur shark could still smell him. #kobisaysicansmellfear #itsstillwinterhere #raddog #dogsofcanada
Me in non traditional running footwear and Kobi eating snow. #normalforus #raddog #muckbootrunning #runningwithdogs #outerpeace 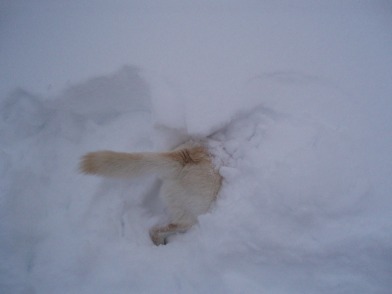 It was nice to see the lake without ice. #kobisaysyoucantseealltheducks #runningwithdogs #raddog #outerpeace #waterdog
I think Kobi is going to sue me for cruelty and humiliation. I let her run for about 4km and then pushed her for another 4km. She was unimpressed as you can see. It’s a roomy ride, if she’d lie down. #shemightloveiteventually #kobisaysiamsoembarrassed #runningwithdogs #dogarthritis
Despite this snowman’s prey avoidance strategy of getting high and not moving, the fur shark could still smell him. #kobisaysicansmellfear #itsstillwinterhere #raddog #dogsofcanada
Me in non traditional running footwear and Kobi eating snow. #normalforus #raddog #muckbootrunning #runningwithdogs #outerpeace
3.5km with Kobi (mostly goofing around in the woods), then 18km by myself. Refuelled with some sour dough at the lake. Saw some massive wolf tracks down a somewhat remote trail. I thought to myself, what would Kobi do? She’d have said let’s turn around. I carried on and ended up shoulder-checking a lot but did run a fast pace for a bit. #fearbasedspeedtraining #itsstillwinterhere #raddog #outerpeace #runningwithdogs
Thanks to the cold weather there’s a thick crust on top of the snow. I can even walk on it without breaking through. Kobi has been enjoying sniffing all the critter tracks.
Loading Comments...