It’s cold and it’s snowy outside.  Not enough snow to snowshoe in yet, but enough snow to hide the ice and make conditions treacherous to run in.  It’s already that time of year when I have to suck it up and start “embracing” winter. The other option is to stay inside on the couch, watch bad reality TV, and eat Cheezies for the next 7 months.  Doesn’t sound too bad.

Figuring out what to wear while running outside in the current temperatures is challenging too.  I never seem to get the layers right and I’m either too hot or too cold, never just right.

Another bonus about winter running is the half-load of laundry created after each run.  Good thing I have more winter running clothes than clothes in general.  That’s mostly so I don’t have to do laundry 3 times a week.  Instead I spend 37 hours on the weekend washing, drying, folding and putting all my stuff away just to start all over again.  I dislike doing laundry.

I’m easing Kobi back into running.  She ran with me for about 35 minutes the other day.  Only once she almost caused a crash.  There were some grouse feathers on the side of the road, where one had been hit by a car likely, and she decided to put on the brakes to check it out – while she was tied around my waist and we were running an interval. Fortunately I managed to stay upright.  Good to know she’s back to her usual running style.  That’s why we run off-leash mostly.

I’ll take her running for another 20 or 30 minutes again today, just to get those running legs of hers back into shape. Shouldn’t take her long.

Oh, we helped with a zombie walk/run this weekend, Kobi got dressed up for it too!

Kobi taking a zombie nap prior to the event 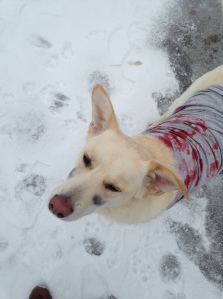 Are you hanging out with zombies this week?  Are you jealous of my snow and ice conditions?  Ever dressed your dog up as a zombie?

19 thoughts on “Winter is Here” 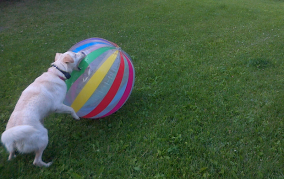