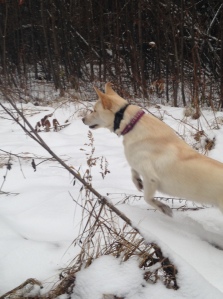 It’s cold and it’s snowy outside.  Not enough snow to snowshoe in yet, but enough snow to hide the ice and make conditions treacherous to run in.  It’s already that time of year when I have to suck it up and start “embracing” winter. The other option is to stay inside on the couch, watch bad reality TV, and eat Cheezies for the next 7 months.  Doesn’t sound too bad.

Figuring out what to wear while running outside in the current temperatures is challenging too.  I never seem to get the layers right and I’m either too hot or too cold, never just right.

Another bonus about winter running is the half-load of laundry created after each run.  Good thing I have more winter running clothes than clothes in general.  That’s mostly so I don’t have to do laundry 3 times a week.  Instead I spend 37 hours on the weekend washing, drying, folding and putting all my stuff away just to start all over again.  I dislike doing laundry.

I’m easing Kobi back into running.  She ran with me for about 35 minutes the other day.  Only once she almost caused a crash.  There were some grouse feathers on the side of the road, where one had been hit by a car likely, and she decided to put on the brakes to check it out – while she was tied around my waist and we were running an interval. Fortunately I managed to stay upright.  Good to know she’s back to her usual running style.  That’s why we run off-leash mostly.

I’ll take her running for another 20 or 30 minutes again today, just to get those running legs of hers back into shape. Shouldn’t take her long.

Oh, we helped with a zombie walk/run this weekend, Kobi got dressed up for it too! 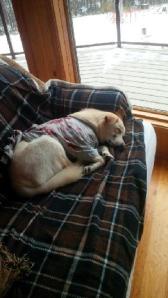 Kobi taking a zombie nap prior to the event

Are you hanging out with zombies this week?  Are you jealous of my snow and ice conditions?  Ever dressed your dog up as a zombie?

I have many quirks (aka superpowers) that you may or may not care to read about, but one that somewhat relates to this post is that I don’t like telling folks what races I have coming up.  I am paranoid that something will happen and I won’t be able to race and then you will be sad.  You likely won’t care one way or the other, but I want to protect you from any unnecessary stress just in case.

Anyway, I nearly had to un-plan my last secret planned race due to Kobi’s injury which totally justifies, in my mind, why I should keep my mouth shut.

I booked this trip over 2 months ago (flights, hotels, etc) and husband was even going to come along as his siblings conveniently live in the city where the race is.  Once he learned that Kobi needed 3 weeks of rest, he quickly offered to stay home and look after her, a little too quickly I might add, and encouraged me to carry on and go to the race.

So I headed off to run a half marathon in beautiful Victoria, BC.

I flew down to the opposite end of the province from where I live and then planned on taking a small seaplane over to the island from the mainland – just for the adventure of it.  Turns out it was foggy the day I was going to do this so my flight was cancelled.  I knew there wouldn’t be many commercial flight options left so I found a commercial bus line that drives you to the ferry and then takes you to downtown Victoria (I had 10 minutes to catch the bus).

What would have taken 30 minutes via seaplane took four hours by bus and ferry.  I also have issues with public transit type forms of travel thanks to my fear of germs.  I had myself convinced I was sick the next day, but I seemed to get over it race day.

Just a bit foggy out

Now onto the race.

The weather was perfect for racing – overcast and not too cold and not too hot, just right.

Another of my quirks you may be fascinated to learn about is that I never wear my Garmin when I race and I rarely if ever look at my watch when racing either.  I love running by feel.

Here’s how I do it:  run just fast enough so that I don’t feel like throwing up and leave enough in the tank to run the last 3km as strong (I always feel yucky by 18km) if not stronger than the first 10km. That’s it. 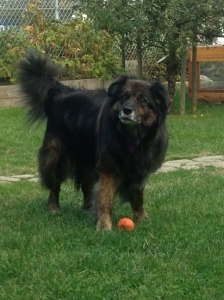 Rosie the lion/dog was there to cheer me on at the 13km mark.

I had secretly (well, not now) really really wanted to run under 1:36.  The clock said 1:36:30 when I crossed the finish line, my chip time was 1:36:19.  I was at first a little bummed, but I got over it as it was 8 seconds faster than my fastest half marathon ever time and just under 2 minutes faster than my fastest time for this race.

What I find cool about this race is that there are a few loops you have to run out and back so you get to see the pros fly by a few times.  Love watching them.

Okay, now a Kobi update.  She’s doing much better.  She still isn’t 100% herself and knowing that dogs are great at hiding pain I’m sure she still needs some time.  Technically we have only 7 more days and she can start running with me again – I’ll ease her in slowly of course.

Ever had to make exciting last-minute travel changes?  Do you ever race by feel?  Any other pointers to racing by feel?  Do you like Kobi’s white teeth?

This stuff has already melted, but it will be back

It was so cold on my run last weekend I had to wear a toque (wool hat for you non Canadians), a jacket and mittens (my hands are ridiculously cold all the time).  That run inspired me to do the closet swap  – you know – pack all your summer clothes up and bring out the sweaters.  Gotta love life in the north.  I shouldn’t even bother putting winter clothes away for the short “hot” season we get, but it is more out of principle.

Did you know we had 3.5 months snow free this year?  Pretty amazing hey?

Regardless of the cold, I am still loving running in the wilds right now.  With no bugs and the beautiful colours who could resist?!

Kobi on our foggy weekend run. Notice she’s sticking her tongue out at me.

Kobi has been loving the cooler weather and has 4-7 epic squirrel or grouse chases every walk and run.  Unfortunately one of these epic chases resulted in an injury, a back injury of all things. She must have slipped or tripped as all I heard was a yelp and then she wasn’t keen on jumping up anymore. 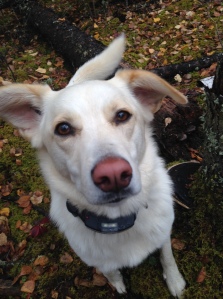 What did you say? I can’t run?

I drove her 390km (230ish miles) one way (and then back again) to see a veterinarian as we were pretty worried (no vet in my town).  No fractures or breaks, but she’s on anti inflammatories and is going to need 3 weeks of rest.  Ever tried containing a hyper-super-fit dog for three weeks?  It’s not going to be easy. Poor Kobi.  She is showing signs of improvement already so everything should be a-okay soon enough. 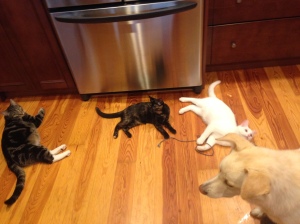 How many months snow free do you get?   Any ideas on how to keep a hyper dog calm without excessive exercise? 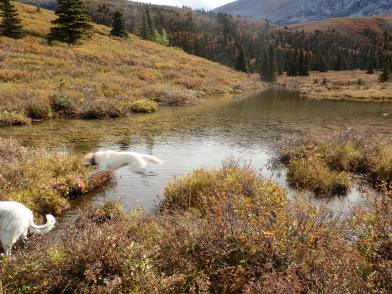 Post snowshoe run celebration. #itdoesntgetbetterthanthis #ikissedthreegirls #runningwithdogs #hurtta #allsznrunner #goodtimesoutside
Fun fact, my human has 5 pairs of snowshoes. Each pair is for different snow conditions and purpose (trail breaking to running fast). We’re not even going to talk about how many running shoes she has (but one pair is for snowshoe running). #myhumanhasagearproblem #wearewinterwarriors #adventuredog #snowdog #dogsofcanada #atlassnowshoes
Not the ‘shot’ I was going for. #itwaswaysteeperthanitlooks #snowshoesliding #runningwithdogs #canadianrunning #atlassnowshoes #wearewinterwarriors #snowshoerunning #winterrunningchallenges #outerpeace #
Marley, the neighbours dog, is envious of Kobi’s lifestyle and joined us for a snowshoe run.
I took this one when I wore shorts last week. It would appear that we have no clue how to kiss. #weareactuallyexpertkissers
Kobi says, “Apparently it’s Monday. Good thing Mondays don’t bring me down.” #kobisapproachtolife #adventuredog #snowdog #hurtta #traildog #besomedoggy #raddog
Loading Comments...
Comment
×